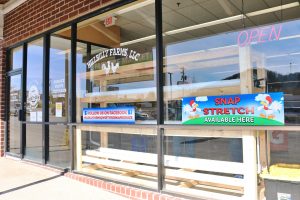 After just a few minutes talking with Doug Lusk, you feel like you’ve gained a new friend. He credits his communication skills to many years of teaching school, which is how he made his living until the summer of 2020. No, this isn’t another tragic story of how the Coronavirus pandemic uprooted someone’s livelihood, but instead a success story.

While Doug was teaching, his family sold homegrown eggs with Sprouting Farms in Talcott, West Virginia. Providing quality, nutritious goods to his community has always been important to Doug, and this was just one of the ways in which he was able to give back. One day in the spring of 2020, Doug had a couple of visitors come to his school to talk about getting kids excited about fresh, local vegetables and fruits and the perks of starting your own garden. This got Doug thinking. He sprang into action, making connections and sacrifices. On June 16, surrounded by his family and city officials, Doug took a giant pair of scissors and cut the ribbon to officially open Hillbilly Farms. 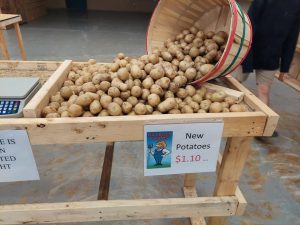 Centrally located right off the Pocahontas ATV Trail System (part of  the Hatfield-McCoy Trail System), in Bluefield, West Virginia, Hillbilly Farms is a brick and mortar farmers market offering fresh daily essentials such as eggs, produce, Amish butter, and homemade featured breads of the week. You can also find camping and trail essentials such as snacks and canned goods. Doug believes in quality products and only fills his shelves with the best. Items are thoughtfully stocked with his customer in mind. “We don’t just put things on the shelves to sell them and make money”, says Doug, “we also believe in keeping money right here where we live, helping the little people and not the big wholesalers and warehouses.” As far as the produce goes, it is about to get even fresher and even more local. 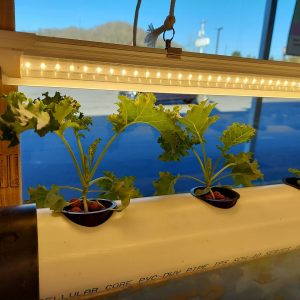 This spring, Hillbilly Farms became the first market in the area to offer a hydroponic growing system inside their market. Just as he did when opening Hillbilly Farms, Doug did his research, built his system, and started growing. By the time you’re reading this, they’ll be leafy, bright green lettuce in the window at Hillbilly Farms. It truly doesn’t get much fresher than that! Doug has also started a Dutch bucket hydroponic system in which he can grow cucumbers, beans and tomatoes. Doug expressed excitement at being able to offer yet another locally sourced and fresh item at Hillbilly Farms. “You don’t always know just how long things are sitting on the shelves at other stores. This way you’ve seen it grow and know its story”, tells Lusk.

Follow along with the story! Doug shares weekly, if not daily, updates on the growth of his hydroponic goods, as well as up to the minute details about what other goods he currently has on his shelves on his Facebook page. Hillbilly Farms is open Monday through Saturday from 8am-6pm.